Gustav Mahler (1860-1911) agreed to stand in for Richard Strauss (1864-1949) as conductor at a concert of contemporary music (Novitaten Konzert) put on by the Gesellschaft der Autoren, Componisten und Musikverleger in Vienna and given by the Vienna State Opera Orchestra. Usually, composers conducted their pieces themselves at these concerts but it was under Gustav Mahler (1860-1911)'s baton that Vienna heard the first performance of the two Preludes to the first and third act of Richard Strauss (1864-1949)'s  - Guntram.

Engelbert Humperdinck (1854-1921), who had attended the 1895 Concert Berlin 13-12-1895 - Symphony No. 2 (Premiere) by Gustav Mahler, was present to conduct his Maurische Rhapsodie and Wilhelm Kienzl to conduct two Interludes from his opera Don Quixote. Mahler's relation with the Graz composer had always been somewhat strained, yet this time they went together for walks in the countryside around Vienna 33.

Wilhelm Kienzl's diary (03-10) informs us that it was intended originally to include works by Camille Saint-Saens (1835-1921) and Karl Goldmark (1830-1915) in the programme. It seems that at this time mahler Promised Kienzl that he would go to Prague or Berlin for one of the first performances of Don Quixote.

Kienzl relates in his diary that the hall was absolutely full for the Novitaten Konzert, and that Cosima Wagner (1837-1930) was present with her daughters to witness the triumph of her son Siegfried Wagner, whose Overture to Der Barenhauter was also on the programme and frantically applauded.

According to Kienzl, Otto Bohler and Oscar Garvens made their well-known caricatures and silhouettes of Mahler were sketched during this concert. See Cartoons and caricatures. Berthold Goldschmidt does not agree.

Afterwards a banquet was given at Restaurant Meissl und Schaden for the three composers present, and Gustav Mahler (1860-1911) felt obliged to attend for diplomatic reasons, despite his dislike of formal banqueting of this kind. 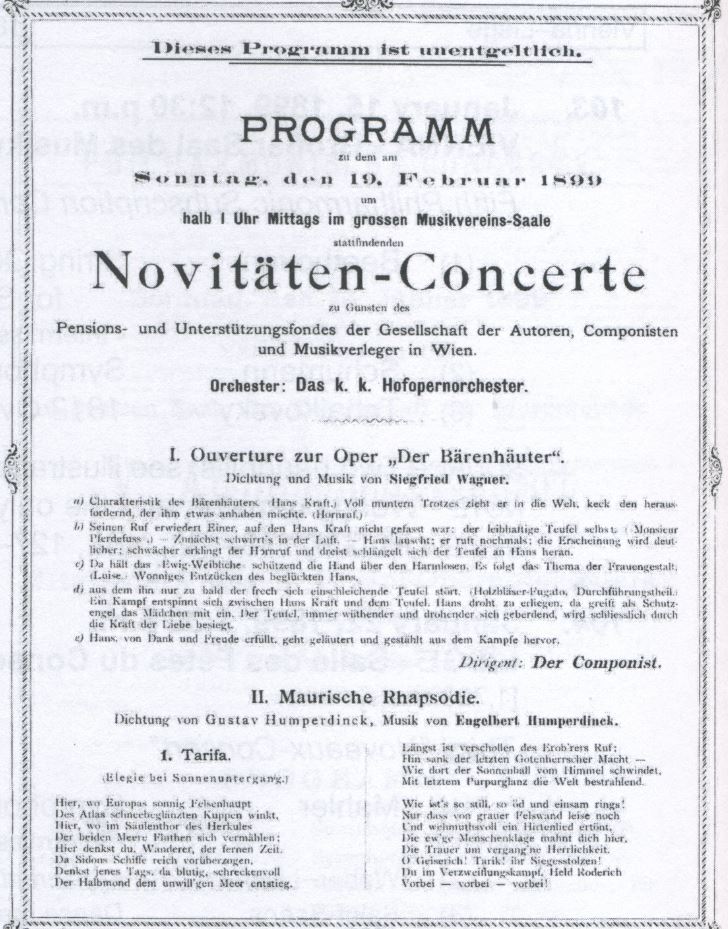