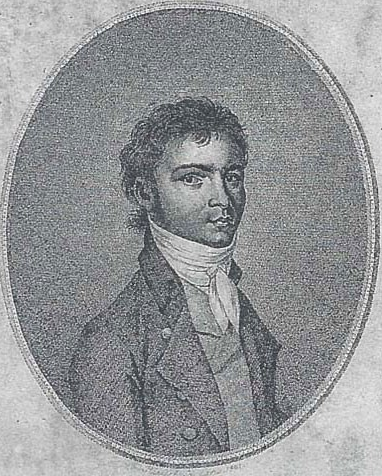 Portrait by Gandolph Ernst Stainhauser von Treuberg, around 1800. There are several existing authentic portraits of Ludwig van Beethoven. The first existing portrait of Beethoven, was painted around 1800 by Gandolph Ernst Stainhauser von Treuberg. This was one of the earliest portraits of Beethoven. It was created after Beethoven first became successful in Vienna. In 1801, Johann Joseph Neidl created a copper engraving that was based on this portrait. The portrait is now considered lost.

Ludwig van Beethoven was a German composer and pianist. A crucial figure in the transition between the Classical and Romantic eras in Western art music, he remains one of the most famous and influential of all composers. His best-known compositions include 9 symphonies, 5 concertos for piano, 32 piano sonatas, and 16 string quartets. He also composed other chamber music, choral works (including the celebrated Missa solemnis), and songs.

Born in Bonn, then the capital of the Electorate of Cologne and part of the Holy Roman Empire, Beethoven displayed his musical talents at an early age and was taught by his father Johann van Beethoven and by Christian Gottlob Neefe. During his first 22 years in Bonn, Beethoven intended to study with Wolfgang Amadeus Mozart and befriended Joseph Haydn. Beethoven moved to Vienna in 1792 and began studying with Haydn, quickly gaining a reputation as a virtuoso pianist.

He lived in Vienna until his death. In about 1800 his hearing began to deteriorate, and by the last decade of his life he was almost totally deaf. He gave up conducting and performing in public but continued to compose; many of his most admired works come from this period.

Ludwig van Beethoven had the dubious pleasure of three burials. He died on the 26th of March, 1827 in Vienna and was buried three days later in the Währinger Ortsfriedhof (a cemetery in one of Vienna's outlying districts). Then in 1863 the authorities decided to repair his burial site. They exhumed the body and put it in a new and better metal coffin before burying him again. Unfortunately, the cemetery shut in 1873, eventually converting to a park in the mid-1920s. In the meantime, it was decided to move Beethoven's remains to a better site. So in 1888, he was dug up again and reburied in one of the honorary graves at the Central cemetery, Vienna's main cemetery.

Third time lucky, one might say, as he's been left to rest there since. His gravestone is a copy of the original from the first cemetery. Written on it are the following words (in German of course): This gravestone was built to the same design as the original in the Währinger Ortsfriedhof and erected by the Association of Friends of Music in 1888 with financial help from the Imperial City Development Fund of Vienna and the Philharmonic Association.