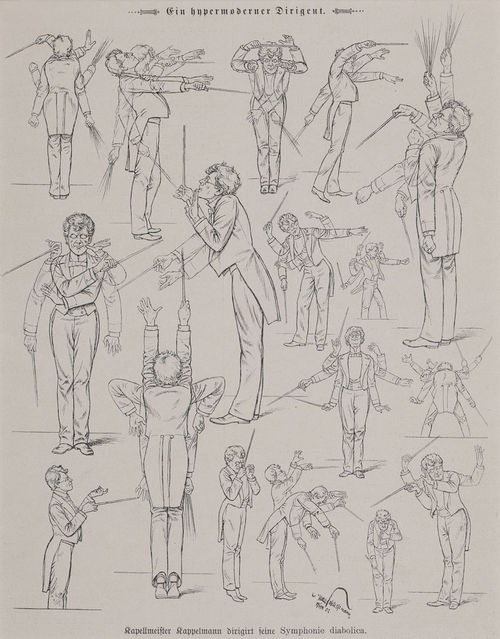 During the fourth visit of Gustav Mahler to Amsterdam, the Concertgebouw Orchestra performed with him his Seventh Symphony. On 1909 Concert Amsterdam 03-10-1909 - Symphony No. 7 the first performance took place in Amsterdam, after the symphony had sounded the night before in The Hague. On 1909 Concert Amsterdam 07-10-1909 - Symphony No. 7 a repetition followed in the Grote Zaal. Some reviewers were allowed to attend the final rehearsal. What is special is that some members of the orchestra have also recorded what they thought of Mahler and his composition.

As the first Max Tak. In 'Under the trees of the square' (1962) he described the rehearsals of the Seventh Symphony. Tak, just eighteen years old, became part of the group of second violins since 01-091909. Much later he would become widely known from New York, partly because of his spoken letters for the AVRO radio.

Before the arrival of Mahler, Willem Mengelberg had studied the musically and technically complicated work very meticulously for a week 'under high voltage'. 'And then came Mahler,' wrote Tak. 'A small, thin man with a high forehead, in which two eyes flare up in the orchestra, hidden behind a rimless pair of glasses'.

He led the orchestra more with the eyes than with the right hand.

What none of the orchestra liked was the fact that Mahler already made a mark on the way in which Mengelberg, with his exact observance of metric division, had made that figure play. This fierce expression begat the conflict atmosphere, which manifested everywhere and so often around Mahler's figure. The Mahler rehearsals went into a near-incident atmosphere. It just did not come to an explosion, especially because Willem Mengelberg (1871-1951) was present at every rehearsal. Thanks to Mengelberg's perfect rehearsal, the sublime performance of Mahler was an unforgettable experience. As a conductor he was a master.

Gustav Mahler conducted his symphony virtually motionless. He led the orchestra more with the eyes than with the right hand. Those who, like me, have played under Gustav Mahler, will almost never have seen the measure so sharply, even by a Toscanini. Mahler played with the orchestra. Every musician felt that he was fulfilling his party as the small great tyrant forced him to do so. '

Unlike Tak, Samuel Blazer was a skilled orchestral musician who worked as a solo bassist since the establishment of the Concertgebouw Orchestra in 1888. He counted Mahler among the greatest conductors. 'His extraordinary musical audience, as well as his vast knowledge of modern orchestral journeys, will touch every show artist'.

It must therefore, I think, be a pleasure for every member of the orchestra to work under his excellent guidance. "Technically, he regarded the Seventh Symphony as" a very grand work ", but he did not judge the musical aspect of it.

Soloistist Herman Meerloo did. Meerloo joined the company on 01-10-1889 and found the unknown composition a grand and brilliant work that demanded the greatest commitment from both the listener and the performer. 'People do not know what to admire more at Mahler: his beautiful, beautiful, colorful instrumentation, or his enormous ability. One may or may not like his music, it is a work of a great and brilliant artist. '

According to the first solo cellist Gérard Hekking - a member of the orchestra since 1904 - the Seventh Symphony had such great proportions that it is difficult for the mind to follow it at first. But Mahler's 'science orchestral est prodigieuse', says Hekking. 'Mahler is a great composer. I am not telling you anything new. "Solo clarinettist Willem Brohm - orchestra member since 1905 - did not want to make judgments about composer conductors, but solo-harassist Richard Krüger and first solo cellist Frits Gaillard were all praises. They were just like Blazer experienced orchestra members: Krüger was a member since 01-10-1888, Gaillard since 01-11-1896.

The magazine De Kunst, from which the foregoing is derived, also stated that there was a strong current in the orchestra in favor of the Seventh Symphony. 'Most people like the work sympathetically, they all recognize that it is a technically extraordinarily valuable composition; The gentlemen also disagree about the idea of ​​"music", and some of them think of it as purely creative. But they are the very small minority. They are, of course, opponents of all Mahler's oeuvre.

During Mahler's final rehearsal several reviewers were allowed to be present in the Great Hall. The founder of De Kunst, Nathan Wolf, tells the following in his magazine: "What I especially enjoyed during this rehearsal is Mahler as" teacher "for the orchestra. He leaves the smallest trifle, the slightest nuance he does not like, until the interpretation is perfect. And "ears" that he has, - ears! ... the orchestra members know how to tell wonders!

At the end of the rehearsal, which lasted until a quarter to twelve, with only a few minutes of rest, the genius conductor was given an intimate but warm ovation by the orchestra. I can therefore imagine that the orchestra is pleased with this conductor. Mahler has stated - and Mahler is very sincere, does not bother about it! - that he, after the orchestra in Vienna, of which he used to be a conductor, never conducted a more beautiful, never sound orchestra than the Amsterdam. '

Daniël de Lange congratulated the public in the Netherlands in The News of the Day with the opportunities offered to get acquainted with the Seventh Symphony 'in a way that is only possible with such an excellent orchestra as ours and that under leadership of the creator himself. On Sunday and Thursday we will celebrate festivals of music. "

And what Mahler thought of it himself? 'Everything is prepared in a gleaming way. Kling großartig ', he wrote to his wife and:' Das Orchester is a wonderful and undisguised family. Dießmal ist es ein Plaisir und keine Arbeit. "No wonder that a delegation of the musicians came to ask him to conduct the other programmed music during one of the concerts:" Sie wollten so gerne auch einmal Beethoven or Wagner von mir teachers. "Due to time constraints, this was limited to the Voorspel Die Meistersinger von Nürnberg.

Theodore Spiering (1871-1925), NYPO concertmaster, and himself a conductor wrote that: As a conductor he had developed over the years an informality of technique that was sometimes almost fatal for the orchestra. In correcting one player's inaccuracy, or while trying to get across some nuance or particular phrasing, he tended to forget that the whole orchestra was dependent on his beat.

Alois Reiser, cellist in the NYSO in 1908: "His beat was poor, not a regular pattern, just a rhythm, pure expression. But we understood after a couple of rehear s als."

Benjamin Kohon, 2nd bassoon in the NYPO: "I remember he had a run in with the oboe player, who was an older man than I was and had lots of experience in orchestras. And he once said to Mahler: "Mr Mahler, we don't understand your beat, it's hard for us to know what to do." So he says: "Good musicians don't need a conductor: a conductor is only a necessary evil... Don't worry what I do: just play your music."

"I played a few performances with him at the Metropolitan - The Bartered Bride - and Mahler had a habit of dropping his arm, either from fatigue or thinking of something else. He'd drop it right down under the stand and Mr Rothmeyer (principal second violin and personnel manager) used to ...