Scheveningen is one of the eight districts of The Hague, as well as a subdistrict (wijk) of that city. Scheveningen is a modern seaside resort with a long, sandy beach, an esplanade, a pier, and a lighthouse. The beach is popular for water sports such as windsurfing and kiteboarding.

The earliest reference to the name Sceveninghe goes back to around 1280. The first inhabitants may have been Anglo-Saxons. Other historians favour a Scandinavian origin. Fishing was the main source of food and income.

The Battle of Scheveningen was fought between English and Dutch fleets off the coast of the village on 10 August 1653. Thousands of people gathered on the shore to watch. A road to neighbouring The Hague was constructed in 1663 (current name: Scheveningseweg).

In 1818, Jacob Pronk constructed a wooden building on a dune near the sea, from where people could bathe from four separate rooms. It marked the start of Scheveningen as a bathing resort. Since then, Scheveningen has attracted numerous tourists from all over Europe, notably from Germany. The hotel and restaurant Kurhaus was opened in 1886. 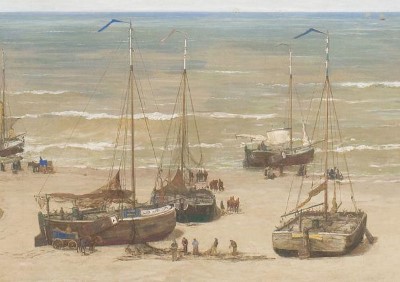 The picturesque village attracted many Dutch artists over the centuries who painted the bomschuiten drawn up on the beach, or fishermen at work in the North Sea. Notable painters who recorded the village include Adriaen van de Velde, Simon de Vlieger, and Hendrik Willem Mesdag, whose enormous panorama, 14 m high and 120 m wide, preserves the view of Scheveningen in 1881.