The Beurs van Berlage is a building on the Damrak, in the centre of Amsterdam. It was designed as a commodity exchange by architect Hendrik Petrus Berlage and constructed between 1896 and 1903. It influenced many modernist architects, in particular functionalists and the Amsterdam School. It is now used as a venue for concerts, exhibitions and conferences. Stock exchange.

The building is constructed of red brick, with an iron and glass roof and stone piers, lintels and corbels. Its entrance is under a 40m high clock tower, while inside lie three large multi-storey halls formerly used as trading floors, with offices and communal facilities grouped around them.

The aim of the architect was to modify the styles of the past by emphasizing sweeping planes and open plan interiors. It has stylistic similarities with some earlier buildings, for instance St Pancras station and the work of H. H. Richardson in America, or the Castell dels Tres Dragons, Barcelona, by Lluís Domènech i Montaner. True to its nineteenth-century roots, it maintains the use of ornament in a civic structure. 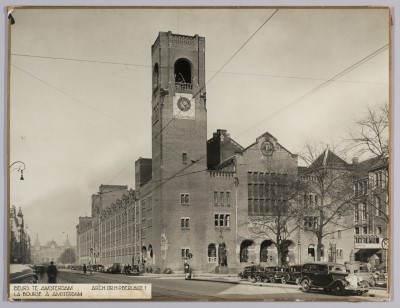 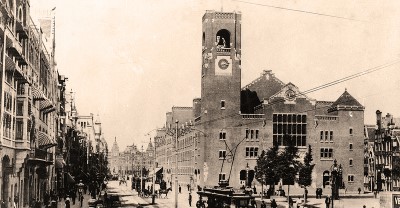