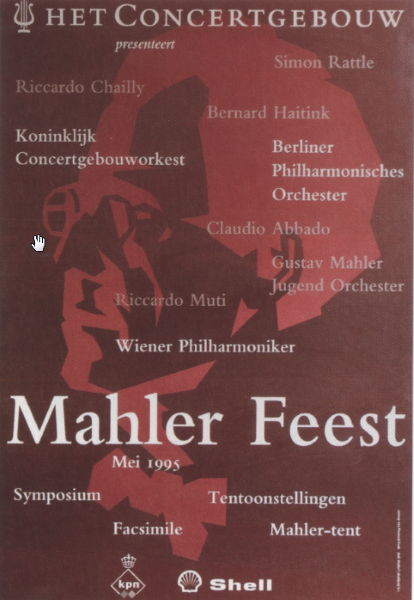 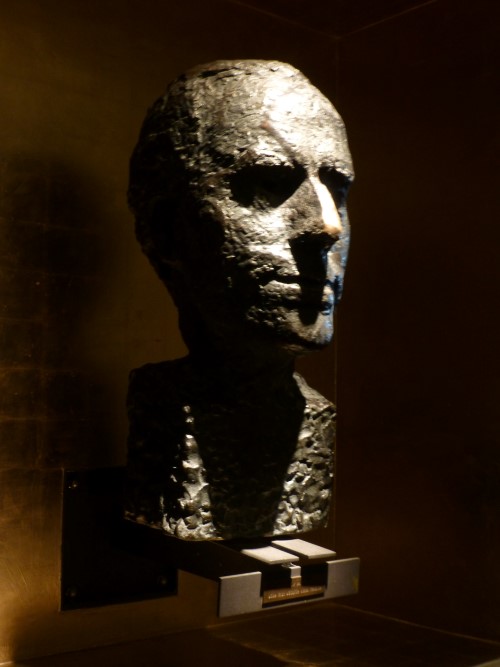 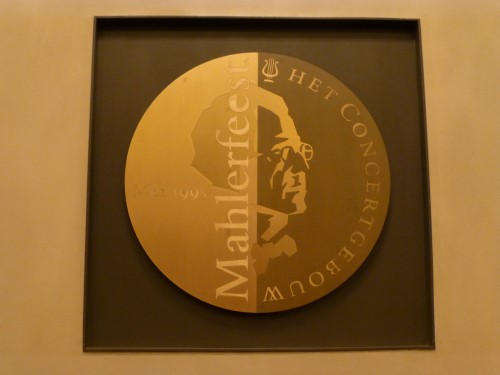 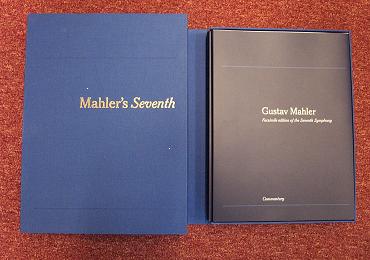 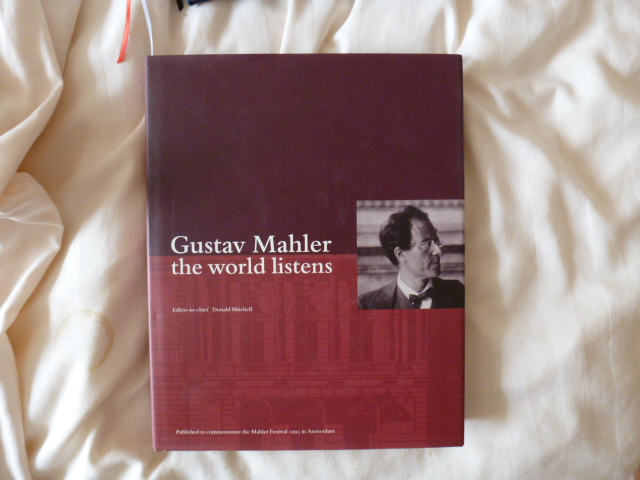 AMSTERDAM, May 7— There are enough celebrations and commemorations crossing paths here to make the head spin and, more to the present point, the ears twirl.

After paying tribute on Thursday to those killed in World War II, the Netherlands on Friday celebrated the 50th anniversary of its liberation from German occupation. Among many other observances of that occasion, the Concertgebouw Orchestra performed Mahler's "Resurrection" Symphony (No. 2), led by its former music director Bernard Haitink (1929). And therein lies a whole series of tales.

Viewed from another angle, that stirring performance was merely an installment in a mammoth survey of Mahler's orchestral works at the Concertgebouw under the title Mahler Feest. The event, which began last Monday and runs through May 17, more or less recreates a Mahler festival at the Concertgebouw in 1920, celebrating the 25th anniversary of Willem Mengelberg's tenure as music director of the resident orchestra.

So willy-nilly, the current festival refers back a century, to Mengelberg's assumption of the post of music director, which he held for 50 years. All the more reason to celebrate, it might seem. But at this juncture, especially at this time, matters grow dicey and political.

Mengelberg, who was born to German immigrants in 1871 in Utrecht, the Netherlands, grew to mythic status in his homeland. "What Rembrandt is to the outside world in the realm of painting," the Dutch minister of education proclaimed at the 1920 festival, "you are throughout Europe and America as the leader of an orchestra." In the 1930's, Mengelberg's popularity rivaled and perhaps exceeded that of Queen Wilhelmina.

Then came the war. When the Nazis occupied the Netherlands in 1940, Mengelberg was taking a cure in Bad Gastein, Germany. Before appearing with the Berlin Philharmonic two months later, he was quoted in a National Socialist newspaper as saying that he had toasted the invasion with champagne, celebrating all night with friends.

Irreparably disgraced, he returned to stumble through the war years at the Concertgebouw, doing some mitigating good but more often accommodating the Nazi occupiers. In 1947, a national commission stopped short of calling him a collaborator, but determined that he had placed himself "at the service of enemy propaganda." Banned from conducting in the Netherlands for six years, he died in his Swiss retreat in 1951, never having conducted after the war.

Antipathy toward Mengelberg remains deep here. That fateful betrayal still overshadows his indisputable accomplishments, not least as a pioneering Mahlerian whose interpretations were certified by the master.

"This is a Mahler celebration, not a Mengelberg celebration," said Martijn Sanders, the director of the Concertgebouw and organizer of the Mahler Feest. "But I wanted to make discussion of Mengelberg the artist possible again. It is an attempt at artistic rehabilitation."

There are other things this imposing festival is not, Mr. Sanders was quick to point out.

"It is not a festival of orchestras," he said. No matter that the Concertgebouw is embarking on a weeklong tour to make way for the Vienna and Berlin philharmonics in the next six concerts. (Although no point is being made of it, the Berlin Philharmonic is to play Mahler's Sixth Symphony, the "Tragic," on Wednesday, the 55th anniversary of the German attack on the Netherlands.)

The aim, Mr. Sanders explained, was simply to invite orchestras with which the composer had personally established a Mahler tradition as conductor, and in which that tradition had been continuously nurtured. As luck would have it, the festival's three prominent orchestras happen to be among the world's finest.

But what of the New York Philharmonic? Mahler was its principal conductor from 1909 to 1911; Mengelberg, from 1922 to 1930. Mr. Sanders leaped at the question before it could be asked.

"If Bernstein were around today, I would have been glad to have them," he said. As it is, he suggested, the orchestra may be neglecting its Mahler tradition, performing the works too rarely.

For some, Leonard Bernstein (1918-1990)'s absence raises a larger issue: whether there are any great Mahler maestros left. The festival, viewed as a whole, should reveal much about the highest levels of performance now attainable.

Certainly, Mr. Bernard Haitink (1929) is an experienced and versatile Mahlerian, and his stately performance of the "Resurrection" Symphony (No. 2) -- eminently sane, as always, though appropriately grand or explosive at climaxes -- showed a wisdom and commitment to suit the exalted occasion. He will remain at the center of events, conducting the Third and Sixth Symphonies as well as "Das Lied von der Erde."

Riccardo Chailly, the Concertgebouw Orchestra's current music director, led the orchestra in a firmly directed, pristine account of Mahler's First Symphony on Wednesday evening, easily the best effort this listener has heard from him. And the orchestra's playing in both works was superb in detail and in overall effect.

But where are unbridled Mahlerian passion and fearsome Mahlerian angst? Will Riccardo Muti, Claudio Abbado or Simon Rattle summon them in greater measure, and can Mr. Bernard Haitink (1929) step up his intensity to match that of his last performances at Carnegie Hall as music director of the Concertgebouw Orchestra 13 years ago? If not, the overriding message of the Mahler Feest may be that the distinctive legacy of Mengelberg, a willful, often exasperating but more often exhilarating maestro, has been left for dead.

As if to compensate in song for what may be lacking in symphony, the baritone Thomas Hampson gave two supurb Mahler recitals in the Concertgebouw on Saturday and today, with Wolfram Rieger as the expert pianist. Mr. Hampson seemed the very model of a Mahler interpreter, pouring his outsize personality into these songs (some of them actual symphonic movements), risking all at every turn, subsuming small defeats in indomitable victories.

With smaller-scale recitals presented in a tent near the Concertgebouw, the festival is to cover virtually all of Mahler's works. Only out-takes, like the "Blumine" movement of the First Symphony, are missing, said Donald Mitchell, the Mahler biographer who edited the impressive festival book, "Gustav Mahler: The World Listens," and who will co-direct a four-day Mahler symposium beginning on Saturday.

The Mahler Feest is to end the day before the anniversary of Mahler's death on May 18, 1911. Although solemnly commemorated 75 years ago, the date might have injected one idea too many here. Then again, what could have been more appropriate than to end a festival devoted to a pessimistic and death-haunted composer on a note of gloom?

"Here lies the great mistake," wrote Paul F. Sanders, an Amsterdam critic and Martijn Sanders's great-uncle, in 1920: "that people have thought it possible to perform these works, which are cries of despair, which are written in the master's blood, in a festive atmosphere."

Still, the first festival proved a vital, memorable occasion for many serious musicians and a boon for the composer's posthumous standing, and the second promises to do likewise.