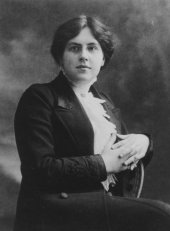 Nadia Boulanger was born in Paris on 16 September 1887, to French composer and pianist Ernest Boulanger (1815-1900) and his wife Raissa Myshetskaya (1856-1935), a Russian princess, who descended from St. Mikhail Tchernigovsky.

Ernest Boulanger had studied at the Paris Conservatoire and, in 1835 at the age of 20, won the coveted Prix de Rome for composition. He wrote comic operas and incidental music for plays, but was most widely known for his choral music. He achieved distinction as a director of choral groups, teacher of voice, and a member of choral competition juries. After years of rejection, in 1872 he was appointed to the Paris Conservatoire as professor of singing.

Raissa qualified as a home tutor (or governess) in 1873. According to Ernest, he and Raissa met in Russia in 1873, and she followed him back to Paris. She joined his voice class at the Conservatoire in 1876, and they were married in Russia in 1877. Ernest and Raissa had a daughter who died as an infant[citation needed] before Nadia was born on her father's 72nd birthday.

Through her early years, although both parents were very active musically, Nadia would get upset by hearing music and hide until it stopped. In 1892, when Nadia was five, Raissa became pregnant again. During the pregnancy, Nadia's response to music changed drastically. "One day I heard a fire bell. Instead of crying out and hiding, I rushed to the piano and tried to reproduce the sounds. My parents were amazed."After this, Boulanger paid great attention to the singing lessons her father gave, and began to study the rudiments of music.

Her sister, named Marie-Juliette Olga but known as Lili (1893-1918, died of Crohn's disease), was born in 1893, when Nadia was six. When Ernest brought Nadia home from their friends' house, before she was allowed to see her mother or Lili, he made her promise solemnly to be responsible for the new baby's welfare. He urged her to take part in her sister's care.

From the age of seven, Nadia studied hard in preparation for her Conservatoire entrance exams, sitting in on their classes and having private lessons with its teachers. Lili often stayed in the room for these lessons, sitting quietly and listening.

In 1896, the nine-year-old Nadia entered the Conservatoire. She studied there with Fauré and others. She came in third in the 1897 solfège competition, and subsequently worked hard to win first prize in 1898. She took private lessons from Louis Vierne and Alexandre Guilmant. During this period, she also received religious instruction to become an observant Catholic, taking her First Communion on 4 May 1899. The Catholic religion remained important to her for the rest of her life.

In 1900 her father Ernest died, and money became a problem for the family. Raissa had an extravagant lifestyle, and the royalties she received from performances of Ernest's music were insufficient to live on permanently. Nadia continued to work hard at the Conservatoire to become a teacher and be able to contribute to her family's support.

In 1903, Nadia won the Conservatoire's first prize in harmony; she continued to study for years, although she had begun to earn money through organ and piano performances. She studied composition with Gabriel Fauré and, in the 1904 competitions, she came first in three categories: organ, accompagnement au piano and fugue (composition). At her accompagnement exam, Boulanger met Raoul Pugno, a renowned French pianist, organist and composer, who subsequently took an interest in her career.

In the autumn of 1904, Nadia began to teach from the family apartment at 36, rue Ballu. In addition to the private lessons she held there, Boulanger started holding a Wednesday afternoon group class in analysis and sightsinging. She continued these almost to her death. This class was followed by her famous "at homes", salons at which students could mingle with professional musicians and Boulanger's other friends from the arts, such as Igor Stravinsky, Paul Valéry, Fauré, and others. 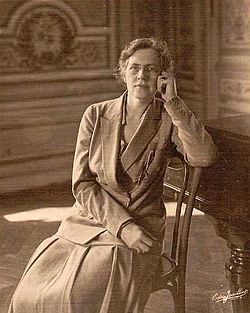