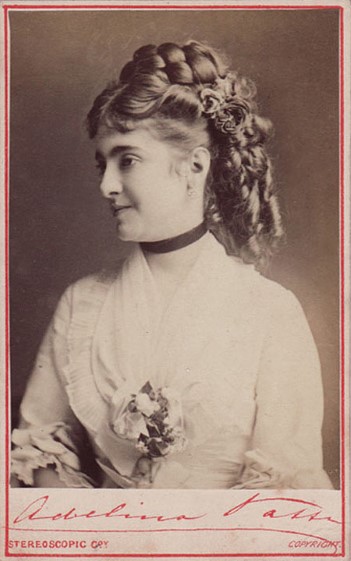 Adelina Patti was an Italian-French 19th-century opera singer, earning huge fees at the height of her career in the music capitals of Europe and America. She first sang in public as a child in 1851, and gave her last performance before an audience in 1914. Along with her near contemporaries Jenny Lind and Thérèse Tietjens, Patti remains one of the most famous sopranos in history, owing to the purity and beauty of her lyrical voice and the unmatched quality of her bel canto technique.

The composer Giuseppe Verdi, writing in 1877, described her as being perhaps the finest singer who had ever lived and a "stupendous artist". Verdi's admiration for Patti's talent was shared by numerous music critics and social commentators of her era.

She was born Adelina Juana Maria Patti, in Madrid, the last child of tenor Salvatore Patti (1800-1869) and soprano Caterina Barilli (died 1870). Her Italian parents were working in Madrid, Spain, at the time of her birth. Because her father came from Sicily, Patti was born a subject of the King of the Two Sicilies. She later carried a French passport, as her first two husbands were French.

Her sisters Amalia and Carlotta Patti were also singers. Her brother Carlo Patti was a violinist who married actress Effie Germon. In her childhood, the family moved to New York City. Patti grew up in the Wakefield section of the Bronx, where her family's home is still standing. Patti sang professionally from childhood, and developed into a coloratura soprano with perfectly equalized vocal registers and a surprisingly warm, satiny tone. Patti learned how to sing and gained understanding of voice technique from her brother-in-law Maurice Strakosch, who was a musician and impresario.

Adelina Patti made her operatic debut at age 16 on 24 November 1859 in the title role of Donizetti's Lucia di Lammermoor at the Academy of Music, New York. On 24 August 1860, she and Emma Albani were soloists in the world premiere of Charles Wugk Sabatier's Cantata in Montreal which was performed in honour of the visit of the Prince of Wales. In 1861, at the age of 18, she was invited to Covent Garden, to execute the role of Amina in Bellini's La sonnambula. She had such remarkable success at Covent Garden that season, she bought a house in Clapham and, using London as a base, went on to conquer the European continent, performing Amina in Paris and Vienna in subsequent years with equal success.

During an 1862 American tour, she sang John Howard Payne's Home, Sweet Home at the White House for the President of the United States, Abraham Lincoln, and his wife, Mary Lincoln. The Lincolns were mourning their son Willie, who had died of typhoid. Moved to tears, the Lincolns requested an encore of the song. Henceforth, it would become associated with Adelina Patti, and she performed it many times as a bonus item at the end of recitals and concerts. 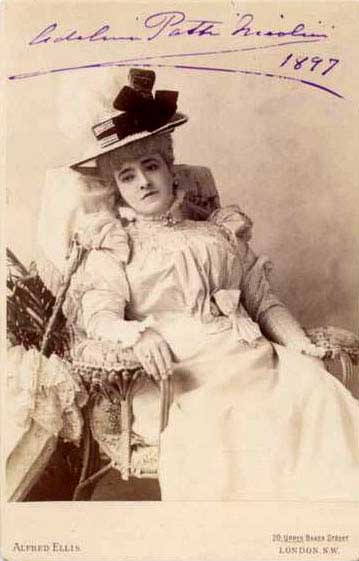 Patti's career was one of success after success. She sang not only in England and the United States, but also as far afield in mainland Europe as Russia, and in South America as well, inspiring audience frenzy and critical superlatives wherever she went. Her girlish good looks gave her an appealing stage presence, which added to her celebrity status.

During the 1860s, Patti possessed a sweet, high-lying voice of birdlike purity and remarkable flexibility which was ideal for such parts as Zerlina, Lucia and Amina; but, as Verdi noted in 1878, her lower notes gained fullness and beauty when she grew older, enabling her to excel in weightier fare. Patti, however, turned into a conservative singer in the final phase of her operatic and concert career. She knew what suited her aging voice to perfection and she stuck to it. Typically, her recital programs during the 1890s featured an array of familiar, often sentimental, not-too-demanding popular tunes of the day, which were sure to appeal to her adoring fans.

But during her mature prime in the 1870s and '80s, Patti had been a more enterprising singer, proving to be an effective actress in those lyric roles that required the summoning forth of deep emotions, such as Gilda in Rigoletto, Leonora in Il trovatore, the title part in Semiramide, Zerlina in Don Giovanni and Violetta in La traviata. She also had been prepared to tackle quite dramatic parts in operas like L'Africaine, Les Huguenots and even Aida. She never attempted to sing any verismo parts, however, because these became popular only in the twilight of her career, during the final decade of the 19th century.

Many years earlier, Patti had experienced an amusing encounter in Paris with the bel canto-opera composer Gioachino Rossini, who was a staunch upholder of traditional Italian singing values. It is related that when Patti's mentor (and brother-in-law), Strakosch, presented her to Rossini at one of his fashionable receptions during the 1860s, she was prevailed upon to sing "Una voce poco fa", from Rossini's The Barber of Seville—with embellishments added by Strakosch to show off the soprano's voice. "What composition was that?", asked the prickly Rossini. "Why, maestro, your own" replied Strakosch. "Oh no, that is not my composition, that is Strakoschonnerie", Rossini retorted. ('Cochonnerie' is a strong French idiom indicating "garbage" and literally meaning "that which is characteristic of or fit for pigs.").

In her prime, Patti demanded to be paid $5000 a night, in gold, before the performance. Her contracts stipulated that her name be top-billed and printed larger than any other name in the cast. Her contracts also insisted that while she was "free to attend all rehearsals, she was not obligated to attend any".

In his memoirs, the famous opera promoter "Colonel" Mapleson recalled Patti's stubborn personality and sharp business sense. She reportedly had a parrot whom she had trained to shriek, "CASH! CASH!" whenever Mapleson walked in the room. Patti enjoyed the trappings of fame and wealth but she was not profligate with her earnings, especially after losing a large proportion of her assets as a result of the break-up of her first marriage (see below). She invested wisely large sums of money and unlike some of her extravagant former colleagues, such as the star tenor Giovanni Mario, who died in poverty, she saw out her days amid luxurious surroundings.

In 1893, Patti created the title role of Gabriella in a now-forgotten opera by Emilio Pizzi at its world premiere in Boston. Patti had commissioned Pizzi to write the opera for her. 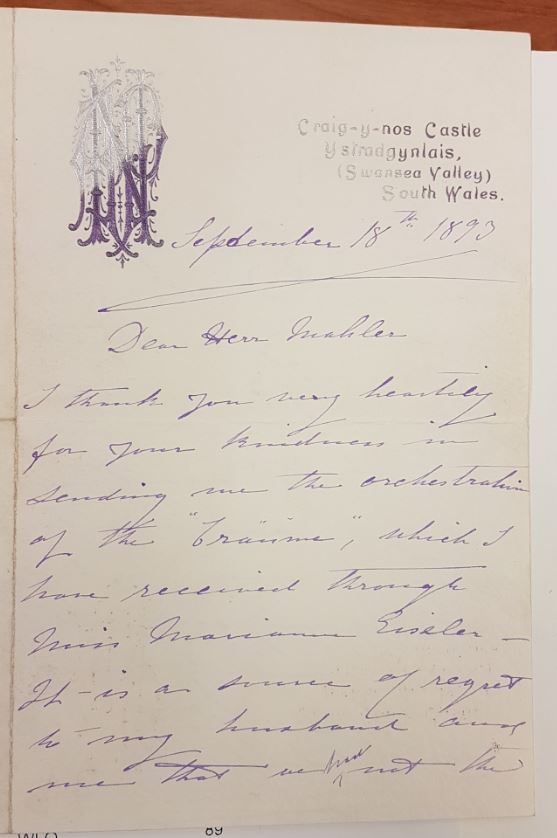 Ten years later, she undertook one final singing tour of the United States; however, it turned out to be a critical, financial and personal failure, owing to the deterioration of her voice through age and wear and tear. From then on she restricted herself to the occasional concert here or there, or to private performances mounted at a little theater she had built in her impressive residence, Craig-y-nos Castle in Wales. She last sang in public on 24 October 1914, taking part in a Red Cross concert at London's Royal Albert Hall that had been organized to aid victims of World War I. She lived long enough to see the war end, dying in 1919 of natural causes. 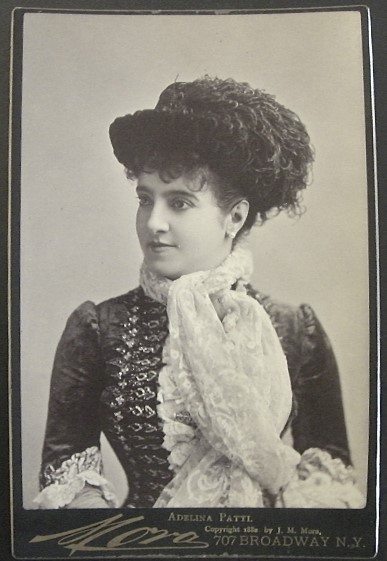 The first recordings of her voice were made ca. 1890 on phonograph cylinders for Thomas Marshall in New York. Neither the recorded title, nor their number are known. The recordings are lost.

Patti cut more than 30 disc gramophone recordings of songs and operatic arias (some of them duplicates) (plus one spoken voice recording (a New Year's greeting to her third husband, which she intended him to keep as a memento)) at her Welsh home in 1905 and 1906 for the Gramophone & Typewriter Company. By then she was aged in her 60s, with her voice well past its prime after a busy operatic career stretching all the way back to 1859.

Nonetheless, the limpid purity of her tone and the smoothness of her legato line remained uniquely impressive, compensating to some extent for the weakening of her breath control. The records also display a lively singing personality as well as a surprisingly strong chest voice and a mellow timbre. Her trill remains wonderfully fluent and accurate and her diction is excellent. Overall her discs have a charm and musicality that give us a hint of why, at her peak, she commanded $5,000 a night.

The records were produced by the Gramophone & Typewriter Company (the forerunner of EMI Records) and were issued in the United States by the Victor Talking Machine Company. Patti's piano accompanist, Landon Ronald, wrote thus of his first recording session with the diva, "When the little (gramophone) trumpet gave forth the beautiful tones, she went into ecstasies! She threw kisses into the trumpet and kept on saying, 'Ah! Mon Dieu! Maintenant je comprends pourquoi je suis Patti! Oh oui! Quelle voix! Quelle artiste! Je comprends tout!' [Ah! My Lord! Now I understand why I am Patti! Oh yes! What a voice! What an artist! I understand everything!] Her enthusiasm was so naïve and genuine that the fact that she was praising her own voice seemed to us all to be right and proper."

Patti is thought by some to have had a dalliance with the tenor Mario, who is said to have bragged at Patti's first wedding that he had already "made love to her many times".

Engaged as a minor to Henri de Lossy, Baron of Ville, Patti wed three times: first, in 1868, to Henri de Roger de Cahusac, Marquess of Caux (1826-1889). The marriage soon collapsed; both had affairs and de Caux was granted a legal separation in 1877 and divorced in 1885. The union was dissolved with bitterness and cost her half her fortune.

She then lived with the French tenor Ernesto Nicolini for many years until, following her divorce from Caux, she was able to marry him in 1886. That marriage lasted until his death and was seemingly happy, but Nicolini cut Patti out of his will, suggesting some tension in the last years.

Patti's last marriage, in 1899, was to Baron Rolf Cederström (1870-1947), a priggish, but handsome, Swedish aristocrat many years her junior. The Baron severely curtailed Patti's social life. He cut down her domestic staff from 40 to 18, but gave her the devotion and flattery that she needed, becoming her sole legatee. After her death, he married a much younger woman. Their only daughter, Brita Yvonne Cederström (born 1924), ended up as Patti's sole heir. Patti had no children, but was close to her nieces and nephews. The two-time Tony Award-winning Broadway actress and singer Patti LuPone is a great-grand niece and namesake. Drummer Scott Devours is her 3rd great nephew. The Welsh opera singer Lisa Lee Dark is her 4th great-grand niece through her marriage to the French tenor Ernesto Nicolini.

In her retirement, Patti, now officially Baroness Cederström, settled in the Swansea Valley in south Wales, where she purchased Craig-y-nos Castle. There she had a $2000 billiard table installed, and her own private theatre, a miniature version of the one at Bayreuth, and made her gramophone recordings.

Patti also funded the substantial station building at Craig-y-nos/Penwyllt on the Neath and Brecon Railway. In 1918, she presented the Winter Garden building from her Craig-y-nos estate to the city of Swansea. It was re-erected and renamed the Patti Pavilion. She died at Craig-y-nos and eight months later was buried at the Père Lachaise Cemetery in Paris to be close to her Father and favourite composer Rossini in accordance with the wishes in her will.

Adelina Patti had a warm, crystalline, and very agile high soprano voice. Her vocal emission was of perfect equality and her vocal range was wide, from low C to high F (C4 - F6). Regarding her technique, critic Rodolfo Celletti said, "Her voice was a technical marvel. The staccatos were marvels of accuracy, even in the trickiest intervals, her legato was impressively smooth and pure; she connects the voice from note to note, phrase to phrase, lifting and gliding with an exceptional virtuosity. Her chromatic scale was deliciously sweet, and her trill was wonderful and solid."